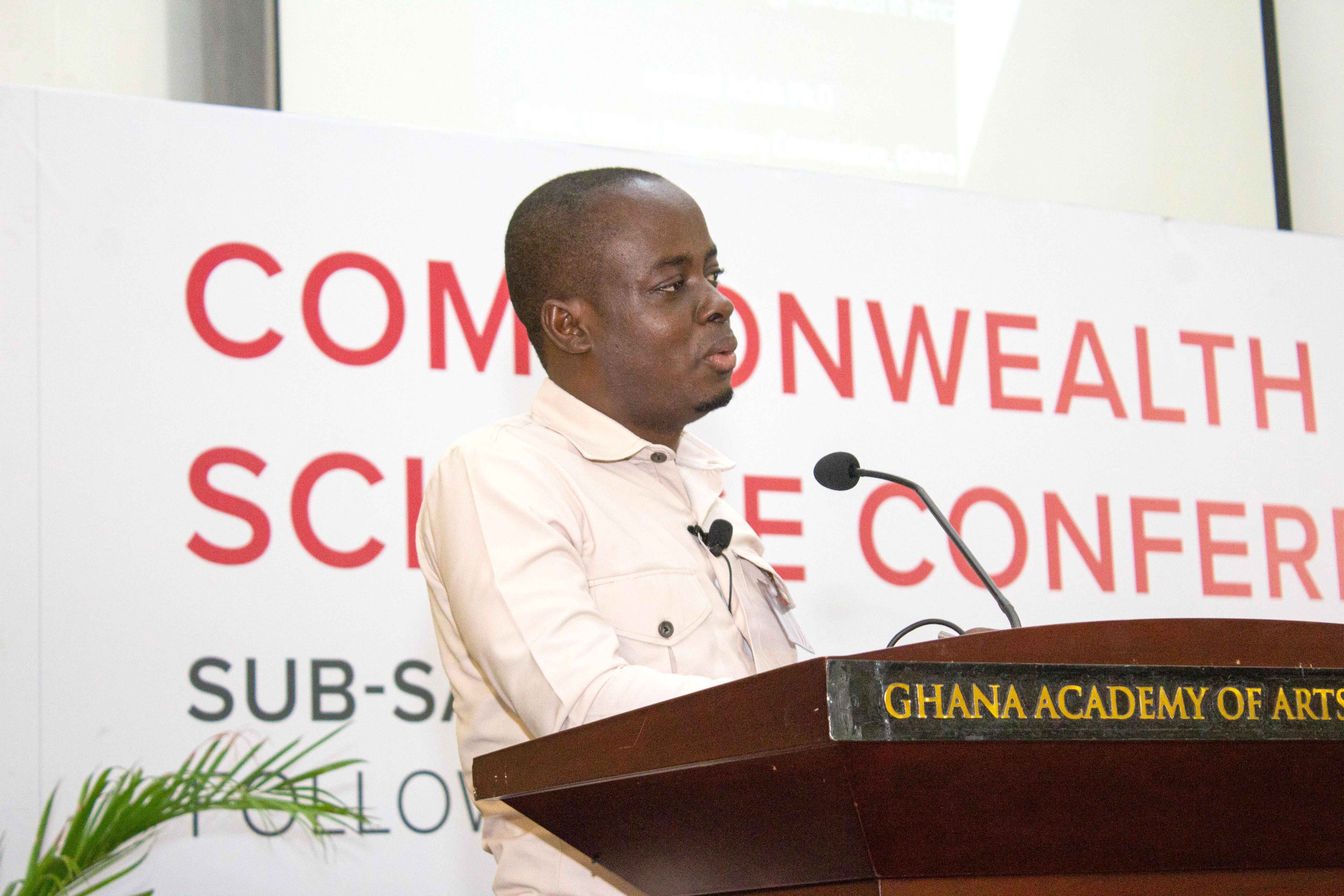 The Executive Secretary of the Public Utilities Regulatory Commission (PURC), Dr. Ishmael Ackah on Monday, 14th March, 2022, presented a paper at the Commonwealth Science Conference, Sub- Saharan Africa Follow-on Meeting held in Accra. The 3-day conference, which took place form 14th-16th of March 2022, was held at the Ghana Academy of Arts and Sciences at which programme, the Executive Secretary of the Commission presented a paper on ‘The Political Economy of the Energy Transition’. The Energy Economist in his presentation hinted that apart from South Africa, the continent of Africa’s energy mix is dominated by hydro technology. He noted that, according to a 2018 report by the International Energy Agency, when electricity generation from South Africa is added to the energy mix of Africa, the energy mix for Sub-Saharan Africa (SSA) consists of 54% coal, 21.3% hydro, 11.5% Gas, 6.2% oil, with other technologies constituting 6.6%.

He also noted that, economies such as Nigeria and Angola are structured around the oil and gas industry, with oil contributing to about 70% of government revenues in Angola. He emphasized that, petroleum revenues have been used for investments, social interventions and debt repayment. For instance, oil revenues in Ghana contribute substantially to the Free Senior High School (FSHS) Initiative, which was rolled out by the Government as part of human capital development strategy.  He pointed out that, approximately 730 million people in Sub-Saharan Africa rely on the traditional use of solid biomass, mainly fuelwood, charcoal, and dung for cooking, typically with inefficient stoves or simple three-stone fires, in poorly ventilated spaces. He was quick to add that transition implies diversified and competitively priced energy sources, which will address the continent’s need for industrialization and access in an environmentally sustainable manner. In his view, there should be research, capital injection, resource base, and good governance to achieve this goal.

Referring to 2021 UNESCO Report, he indicated that, Africa's gross expenditure on research as a proportion of GDP averages 0.5%, compared to the world average of 2.2%. There is no known country in Africa that is spending 1 percent of its GDP on research. Dr. Ackah said in his presentation that, while some SSA countries lack reliable electricity infrastructure, there is a potential opportunity to develop this infrastructure in a more sustainable way than other countries have done in the past through a move towards national electrification. He said countries that can provide low-cost, carbon-free generation could benefit from abundant solar and wind resources. He noted that these can be financed by investing in cost-reducing technologies, adopting a pay-as-you-go arrangement to help spread the upfront cost of renewable energy technologies and structuring payments for new renewable energy technologies so that they are similar to costs of the energy sources they are replacing. Additionally, collaborative investments, with the active engagement of local investments as well as alternative financing sources such as bonds, enhanced refinancing opportunities could all be considered.

In the area of governance, Dr. Ackah stated that setting in place the right regulatory policies and institutional frameworks can lead to unbundling electricity service provision and the opening up of competition in the sector. Setting multi-year tariffs with adjustment clauses, clear renewable energy targets, which align with climate and sustainability targets, together with a clear and transparent procurement process will all aid in providing a transparent and accountable governance process. The provision of information through public education, dissemination of research findings and the strengthening of technical capacity to build domestic innovative capabilities, including skills set for installing, maintaining and repairing renewable energy technologies as well as engaging with local communities including women, in training and maintenance of these systems will all go a long way in transitioning the energy divide.

He intimated that natural gas is a good transbridger fuel. In his estimation, natural gas is a clean source of energy and a good complement to renewables. Natural gas can support the economic transformation of the continent through chemical production, fertilizer manufacturing, cement, and clean cooking fuels. Thus, leaving natural gas in the ground will just delay or deny Africa’s chance of industrializing.

Dr. Ackah concluded by saying that Africa needs to be part of the value chain and not a mere consumer of technologies.